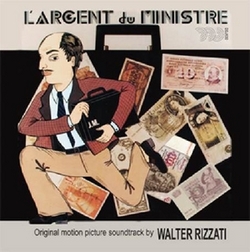 L'argent du ministre (1980) is a virtually unknown movie produced by Lorenzo Del Grande, an eccentric and wealthy tycoon from Monaco with a passion for cinema. Friend of the Roman publisher Franco De Gemini, Del Grande asked him to compose the score for the movie and the Italian Harmonica performer then asked Walter Rizzati to complete the task.

Since that period was particularly florid in a music genre that is very dear to the A&Rs of the DDJ series, it's easy to understand why this was chosen as the 30th soundtrack release in the classic DDJ series. Its hidden energy was already partially revealed at the time speaking through the Beat Records LP release that has long since sold out. This new release has been digitally remastered and features a ton of extra music.

This edition is packaged in a jewel case with a 12-page booklet designed by Alessio Iannuzzi featuring original artwork from the film. Mastering by Enrico De Gemini, liner notes by Fabio Babini. Limited edition of 500 copies!