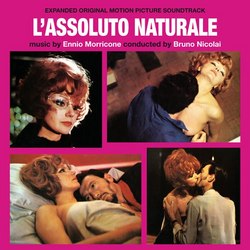 L'assoluto naturale is one of Ennio Morricone's most celebrated collaborations, with a main theme that became immediately an absolute classic. The album was released on LP by Cinevox in 1969, and reissued on CD several times in Italy and Japan.

We are very proud to release the score in complete form for the first time, with a very improved sound mastered by Claudio Fuiano and Dániel Winkler from the first generation master tapes, courtesy of Cinevox.