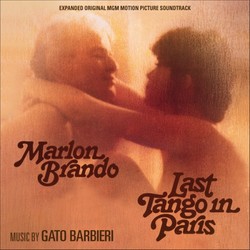 Quartet Records and MGM present the world-premiere complete 2-CD edition of the classic score composed by Gato Barbieri for the no-less-classic film directed by Bernardo Bertolucci in 1972, Last Tango in Paris.

The Argentinian-born composer and saxophonist Gato Barbieri—one of the most prestigious Latin-jazz artists and a living legend (awarded a Latin Grammy last year in recognition of his career)—composed one of the most sensual, unforgettable, catchy and infectious scores of the seventies, whose main theme immediately became a hit.

The successful album released in 1972 by United Artists Records was in fact a re-recording made in New York with great musicians, and a real gem in terms of sound recording. It was first released on CD in the mid-nineties by Ryko, who added to the album about 25 minutes from the original film recording in mono (Varčse Sarabande reissued this same program a few years later). For this edition, we have been fortunate to find the original 8-channel multi-tracks with the complete original film recording, made in Rome.

Listening to all the material prepared by Barbieri for the film (orchestrated and conducted by Oliver Nelson)—an hour of music on 49 different tracks (of which Bertolucci used only about twenty minutes)—adds a wide perspective to this marvelous score heard for the first time in pristine stereo sound.

The second disc features the original album, offered here for the first time mastered from the first-generation 3-track album master tape. The package includes a 16-page booklet with in-depth liner notes by Tim Greiving, including new interviews with Mr. Barbieri and Mr. Bertolucci.