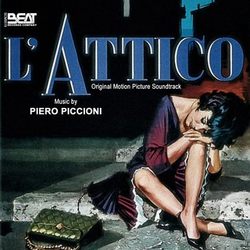 The second of our 2013 series featuring Piero Piccioni's great music for cinema is the score for L'attico (1962). Gianni Puccini directed this bittersweet comedy with a great cast that included Daniela Rocca, Tomas Milian, Philippe Leroy and Walter Chiari.

The score by the Maestro flowed from his prolific, creative veins in the middle of a period of great artistic output by the popular composer. In the case of L'attico we are delighted by a soundtrack that is compact yet at the same time dominated by variety and featuring many different jazz styles and orchestrations, from Dixieland to ragtime and everything in between.

Thanks to the discovery of an abundance of unreleased material, in addition to the original album contents (6 cues published on an old EP by CAM) we were able to assemble a CD with over 70 minutes of music, more than 40 of which are in a great stereo. It's an abundant track list that celebrates the music of a Maestro of another era, always full of pleasant surprises and now captured in this CD that depicts his art from 1962.

It's a second meeting that you can't miss in the series dedicated to Piccioni's career—a series that we recently launched with the release of the soundtrack of I magliari (1959).

The CD is packaged in a jewel case, with mastering by Claudio Fuiano, liner notes by Roberto Pugliese and a 12-page booklet designed by Daniele De Gemini. Limited edition!