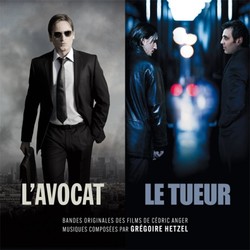 In collaboration with Sunrise Films and AIM, Music Box Records is pleased to present on CD the collaboration between Grégoire Hetzel and Cédric Anger, with the original soundtracks from the director's earliest two films: Le Tueur (The Killer, 2008) and L'Avocat (The Counsel, 2011)

This limited CD release offers two very different musical atmospheres, yet similarly dominated by an efficient and prominent theme. Both punctuated by romantic touches, they reveal the feelings of men in these worlds of mobsters drenched in death and violence.

For Le Tueur, Grégoire Hetzel provided a chilly score, with a mix of coldness and romanticism, dominated by string instruments and influenced by Benjamin Britten's works. For L'Avocat, the lighter main theme, played on the acoustic guitar and the banjo over electric guitar arpeggios, adds Western vibes to the pictures, transforming the characters into cowboys with a deliberate musical reference to Howard Shore's score for Martin Scorsese's The Departed.

The 8-page booklet features liner notes by Sylvain Pfeffer, discussing the films and the scores, based on an original interview with Grégoire Hetzel and Cédric Anger.