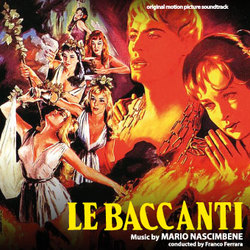 Digitmovies continues its journey into the Peplum genre by releasing on CD for the first time ever, as Volume XXI of the series, the complete OST by Mario Nascimbene (Milan, 1913 - Rome, 2002) for the film Le Baccanti (aka The Bacchantes), based on the tragedy by Euripides, directed in 1961 by Giorgio Ferroni and starring Pierre Brice, Alberto Lupo, Akim Tamiroff, Taina Elg, Alessandra Panaro.

The goddess Minerva is angry with the city of Thebes so that she drained their wells. King Pentheus (Lupo) decides to make a human sacrifice and therefore chooses the daughter of the prophet Tiresias (Tamiroff) called Manto (Panaro), but the god Dionysus (Brice), who takes pity on her, rescues her. Meanwhile Pentheus discovers that his servant Lacdamo (Mattioli) is destined to become king on the grounds of a prophecy: the man is arrested, but nevertheless the prophecy fulfills itself and Lacdamo will marry Manto.

Mario Nascimbene, the great experimenter of new sounds with his prodigious invention of the Mixerama, was one of the first Italian composers for whom the doors of Hollywood opened during the 50s by scoring movies like Alexander the Great, The Vikings, Solomon and Sheba, The Barefoot Contessa and who was very prolific in our country.

For our CD (42:22) we used every note recorded in the mono master tapes of the original sessions. For Le Baccanti the composer has written an epic and mystical theme for orchestra and chorus for the beginning which then develops into a frantic hunt for strings that accompanies the dance of the Bacchantes during the Main Title (Tr.1). This motif alternates with some ballets in honor of Dionysus (Tr.2, Tr.7, Tr.14) as well as with suspense and mystery music (Tr. 3, Tr.8, Tr.10, Tr.16). A proper rescue and preservation of the Italian Silver Age as a tribute to the musical art of the great Mario Nascimbene.