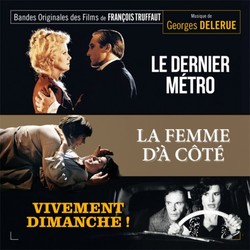 These scores are evidence of the perfect artistic alchemy that existed between the two men. For The Last Metro, the main theme is an ample Viennese-style waltz with a nostalgic vibe. The two other themes, filled with tension and disquiet, are associated with the nocturnal and gloomy wartime life in Paris and the scenes with the German soldiers. Although relatively scarcely present, Georges Delerue's music for The Last Metro is very powerful, and earned him his third César Award. For the more intimate The Woman Next Door, Georges Delerue composed a romantic and tormented score, expressing the main protagonists' forbidden feelings. Confidentially Yours, adapted from Charles Williams's novel, is a glowing tribute to the American detective stories. With its pizzicato strings, its flutes and its oboes, the opening credits theme gives an old-fashioned style to the beginning of the film, as though the music was trying to show that, in spite of all its murders, this movie is essentially a comedy film.

Supervised and restored by Christophe Hénault, the three scores have been carefully remastered with much improved sound over previous releases. This newly remastered reissue of The Last Metro features the same content as the original vinyl and CD presentations without the songs. The expanded score for The Woman Next Door has been fully remastered from original multi-track masters for dynamic, crystal clear audio and includes previously unreleased tracks. Confidentially Yours has also been transferred from the complete session elements, including previously unreleased cues. The CD comes with a 12-page booklet with liner notes by Sylvain Pfeffer, discussing the films and the scores. The release is limited to 1000 units.