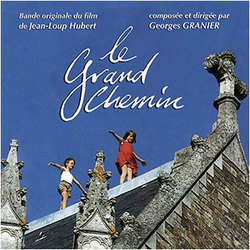 This remastered reissue marks the 25th anniversary of Jean-Loup Hubert's The Grand Highway, starring Anťmone and Richard Bohringer, one of the best films of French cinema ever. As this sentimental drama with many hilarious moments takes place at the end of the 1950s, in a rural community, it retains a timeless charm and generates a nostalgia characteristic of a classic.

Hubert's choice to score The Grand Highway was surprising since the 59-year-old Georges Granier had no professional experience in the field. Still, the result proved to be highly successful. His score relies mainly on the piano, a small strings section, the flute and electronic keyboards. The thematic material is rich and varied enough to manage without a bigger orchestral treatment. Granier's sense of melody and poetical approach are reminiscent of Georges Delerue, of his ability to express the joy and the sadness of living within a few bars.

The original soundtrack CD released by Milan at the time didn't pay justice to the score. We have corrected many errors in the track listing and the timings. Some very short cues, whose melodies and orchestrations are similar, were grouped together to form more substantial pieces, while remaining faithful as much as possible to their chronological order in the movie.

This is a limited release of 500 copies. 8-page color booklet.