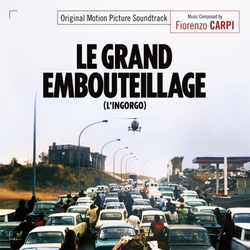 L'ingorgo (aka Traffic Jam) is a dark satire on Italian society as hundreds of cars get involved in a pile-up and no possibility to get out. The all-star cast include Alberto Sordi as a grumpy lawyer, Gérard Depardieu and Miou-Miou as lovers on a break, Ugo Tognazzi as a philandering professor, Fernando Rey and Annie Girardot as a couple whose Silver Wedding reveals dark secrets, Marcello Mastroianni as an ageing gigolo actor and Stefania Sandrelli as the wife who is supposed to sleep with him in order to get her husband a job... The greatest actors of Italy, France and Spain appear in interrelated vignettes, bizarre visions and dark moments as Comencini reveals the true depths of human stupidity.

The music by Fiorenzo Carpi is composed of catchy instrumental tunes, usually used in juxtaposition with the furious drivers. Quirky instrumental songs, joyful dances and addictive tunes appear as source music emanating from car stereos all throughout the traffic jam. The colorful compilation of Carpi's tracks had only one previous release: an LP by Edipan (CS 2008) whose program has been recreated for this CD mastered by Claudio Fuiano - no bonus tracks survived from the film. The package includes 6-page liner notes by Gergely Hubai discussing the film and the score.