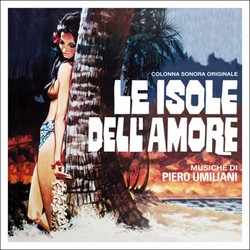 Although he is not as well known as Ennio Morricone or Piero Piccioni, Piero Umiliani may be the most colorful and experimental film composer of the Italian silver age. An avid fan of jazz and the producer of Italy's first bebop record, Umiliani had scored almost 150 movies and recorded a number of highly-sought after concept albums that turned out to be influential in the shaping of Italian film scoring. His score to Svezia, Inferno E Paradiso (1968) is also famous for "Mah Na' Mah Na," the hit novelty song popularized by The Muppets.

Le isole dell'amore was an obscure Italian skin flick, which now is remembered for its entertaining and highly addictive soundtrack by Umiliani, who creates a score from the colorful mixture of tribal percussion and a haunting choir. The world of Pacific music is also mixed with Western sensibilities due to a couple of hippies appearing in the story: banjo, saxophone and a Hammond organ are called upon to compliment this portion of the story. The rich tapestry of odd, seemingly distant instruments made the score a big hit among lounge DJs in the 1990s and we're here to reignite the old flame.

Le isole dell'amore's score had been released two times already, but our CD restored by Claudio Fuiano contains over 40 minutes of previously unreleased music from the recording sessions, including many rare alternates and film versions that round out the score. 8-page liner notes by Gergely Hubai discuss the film, the composer, the score and the exotica movement.