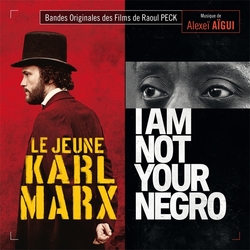 Le jeune Karl Marx / I Am Not Your Negro

In collaboration with Velvet Film and Agat Films, Music Box Records is pleased to present on CD the collaboration between Alexeď Aďgui and Raoul Peck, with original soundtracks from the director's latest two films: The Young Karl Marx (2017) and I Am Not Your Negro (2017).

The Young Karl Marx, premiered at the 2017 Berlin Film Festival, presents a lush period drama that joins 26-year-old Karl Marx (August Diehl) and his wife Jenny (Vicky Krieps) in exile in Europe, where they meet Friedrich Engels (Stefan Konarske), who provides the final piece needed for the foundation of Marxist theory. Alexeď Aďgui composed an orchestral score which is oppressing and touching, featuring haunting passages for elegiac strings, flute and piano. The score has been recorded by the Russian State Symphony Cinema Orchestra and conducted by Sergei Skripka.

The Academy Award-nominated documentary I Am Not Your Negro profiles the remarkable life of James Baldwin, the celebrated American novelist, essayist, playwright, poet, and social critic. The film explores the history of racism in the United States. Alexeď Aďgui composed an eclectic score, featuring intimate orchestral pieces (melancholic piano and touching strings) and jazz tunes (trumpet, bass) to emphasize the melancholy tone.