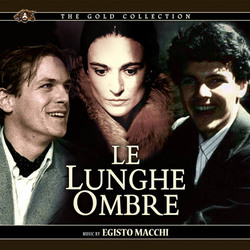 Kronos Records is extremely proud to present the soundtrack to the 1987 Gianfranco Mingozzi Italian TV Series Le lunghe ombre (The Long Shadows), starring Lina Sastri, Tobias Hoesl, Leonardo Ferrantini, Dominique Sanda and Beppe Chierici. The WWII themed TV series' plot revolves around the story of two adolescents who join the resistance and in the last Winter of the second world war get to know a war displaced cinema actress and both fall in love with her and it was aired by Italian national television RAI, Radio Televisione Italiana.

The music was composed by none less than Egisto Macchi, one of the most important Italian composers, who wrote a very dramatic score, ranging from small string ensembles with piano and synthesizers to bigger orchestral pieces, most of which echoing drama and impending doom, but also lighter pieces evoking tenderness, innocence and love. A true masterpeice by one of the most unique and brilliant composers of the twenteeth century.

Never released before in any format and is a worldwide exclusive to Kronos Records, courtesy of the SUGAR / CAM Vaults. The CD contains the complete score that Maestro Macchi composed for Le lunghe ombre.