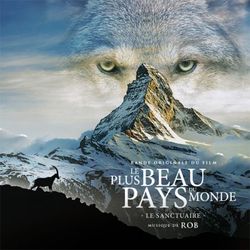 Five years after the great success of Wild France 1 and 2 (high quality prime-time films that have won French audiences' hearts with 7 and 5 millions viewers on France 2), the director Frédéric Fougea comes back with a third opus Le Sanctuaire (The Sanctuary: Survival Stories of the Alps). Narrated by Nathan Willcocks (in the English version), this film is a dive inside a wild land where nature hides some of her greatest secrets: The Alps.

From the mighty bear who fears no one to the strange bearded vulture who only eats bones, from the lonely she-wolf cast out of her pack to the surprising brown frog who lives in the snow, the animals who live in the Alps must outsmart each day the natural hazards of this extreme environment.

Rob composed an ethereal, electronic and haunting score which emphasizes the wilderness of the Alps and the surprising destinies of those species facing the violence of the mountain. The score also has a mystical and elegant vibe with these hauntingly female voices. The release is limited to 300 units.