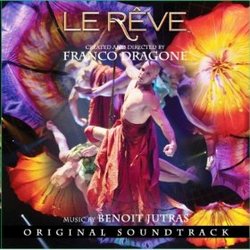 The more film scores one listens to, the more one begins to detect trends. When one composer comes up with a groundbreaking ensemble of instruments, five more composers are usually waiting just around the corner to steal this exact same sound for their score, mostly not out of jealousy but out of pressure from studio executives who want that sound for their movie. One also begins to see a given melody slipping through the cracks and showing its head in thrillers, romantic comedies, action epics. There\'s only so many ways a composer can put together twelve notes. Indian composers are a bit luckier in that respect.

In Benoit Jutras\' imposing score to Le Rêve, a no-holds-barred circus-like show at the Wynn Las Vegas, I heard familiar melodies. There\'s a piano line in "Between the Lines" that reminded me of Michael Andrews and Gary Jules\' take on "Mad World" from Donnie Darko. The theme Jutras uses in "Overture" and which comes back in several cues, the glue of the score, seems to recall "Flight" from le Cirque du Soleil\'s Kà. And "Splash" uses (deliberately or not, I cannot say) a secondary phrase from Zimmer\'s famous "Brothers" piece in Broken Arrow. I could have dismissed the whole soundtrack as an uninventive copycat, but I can\'t. Melody isn\'t everything in scoring: it is an important element, but one has to sometimes look beyond it. In spite of some familiar refrains, Le Rêve is indeed imposing, entertaining and, perhaps most importantly, cohesive.

Jutras was one of the pioneers of Cirque du Soleil\'s music, and so Le Rêve is similar in sound, making use of choirs, an orchestra, electric guitars and basses, and drum kits, but it comes off as more cohesive than René Dupéré\'s latest Cirque du Soleil offering, Kŕ, and the reason probably lies within the melodies, especially one which opens the album and which weaves itself into the construct of the score. It forms the backbone of the cue "Samurai" and is given a magnificent and powerful performance on the erhu accompanied by great brass support. Another reason for this constancy is in the restraint Jutras shows in his instrumentation. While Dupéré created each cue individually, using different instruments, tones, and colors, Jutras concentrates on one sound for the whole show and the result is a score that is less exotic than Kà but more consistent.

The overarching style somewhat recalls E.S. Posthumus and, at its best, gives the current crop of film composers a run for their money. The "Overture" is a definite highlight, with a solo vocalist accompanied by low strings and a solo cello in elegiac mode. A choir comes in to heighten the mournful tone and the harmonic writing is virtually flawless, lending great credibility and emotion to the cue. "Filet" is the most Posthumus-like piece on the album, consisting of a low piano rhythm, drums, an electric guitar, and a male choir. A recurring choral theme stops the proceedings from time to time and it\'s impossible not to be reminded of Don Davis\' superb "Neodammerung" vocal stylings. Where Le Rêve falters a bit for me is in its use of songs. The pseudo-exoticism of Kà\'s songs cannot be found here, replaced instead by mostly downbeat, introspective songs sung by a Rufus Wainwright sound-alike. The instrumental accompaniment to all of the songs, from "Between the Lines" to "Dreaming", is always interesting, but the vocal element grates me a little bit, although I suppose it\'s part of the game when it comes to modern "circus" music.

Benoit Jutras\' Le Rêve is an impressive achievement, deftly mixing choirs, strings, brass, Asian plucked and bowed instruments, rock band staples, and techno loops and samples into a coherent whole. Some of the melodies may ring a few bells in the score aficionado\'s mind, but it\'s a minor quibble when one looks at the production values and the sheer talent in presence. It is impossible not to be blown away by the finale of "Dreaming", where bass drums make hearts tremble, choirs accompany the singer, and strings let us imagine a sweeping vista, all culminating in nothing less than an orchestral and choral orgasm. Yet another powerful reminder that some of the best film music nowadays can be found outside of the film arena.