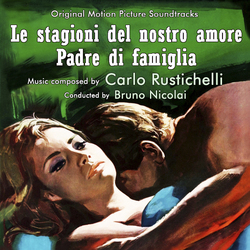 Saimel Records proudly presents on this CD the world premiere release of two haunting scores by Carlo Rustichelli which were written in 1966 and 1967 for two quite different films which both dealt with the transformation of the Italian society during the economic boom of the mid 1960s and the loss of post-war ideals and values – one in the form of a gloomy introverted drama, the other as a sarcastic melancholic comedy.

Le stagioni del nostro amore (1966) was directed by Florestano Vancini and had an excellent cast of Italian and French actors with Enrico Maria Salerno, Anouk Aimée, Jacqueline Sassard, Gian Maria Volonté and Gastone Moschin. It is a poignant analysis of a middle-aged communist intellectual (Salerno) desperately on the search for his identity after his personal life has collapsed and his beliefs in communist politics have been shattered. Vancini uses the individual case to mirror in it the sentimental and ideological crisis of an entire generation which has lost its former socialist convictions and given in to tearful resignation and complacent withdrawal.

Rustichelli´s score for the most part illuminates the psychological state of mind of the main character by contrasting two quite different evocative themes which are related to the different time phases in which the film takes place: the wailing jazzy theme for saxophone, trumpet and piano with its melancholic variants mirrors Vittorio´s loneliness and disillusionment whereas a lovely nostalgic "memory theme" is mostly heard during the flashback scenes. Rustichelli´s highy emotional score enhances the individual sequences, fits the picture like a glove and manages to link the past and the present with its memorable themes.

The second half of our CD is devoted to Rustichelli´s music for Il padre di famiglia (1967) which was already the fourth collaboration between the composer and the director Nanni Loy. In this rather bitter comedy about the troubled lives of an idealistic couple of architects Nino Manfredi brilliantly portrays the unsuspecting husband Marco who slides from one awkward and absurd situation into another whereas former MGM musical star Leslie Caron plays his caring, self-sacrificing wife Paola. The supporting cast consists of Ugo Tognazzi and of the French Bond girl Claudine Auger as Manfredi´s secret lover.

The core of Rustichelli´s music is a charming romantic waltz tune which conveys the happiness of the couple Marco and Paola with warm strings and added electric organ which gets used in many variations according to the mood of the individual sequences of the film. Although the waltz theme and its fragments dominate the score, there is also a more introspective, sultry saxophone theme and in contrast to the romantic material a march-like agitated string ostinato with a few piano interpolations which describes unrest and agitation.

In the case of Le stagioni del nostro amore we had access to the mono master tapes from the Sugar Music archives whilst those for Il padre di famiglia had been recorded and preserved in stereo.