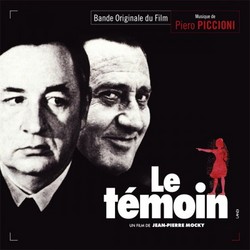 Piero Piccioni composed a very light score which accentuates the ambiguity of the film. This new remastered edition presents the two catchy main themes, originally issued on 45 RPM single by General Music France and their variations, which perfectly match for comic scenes and create unease in the darkest scenes.

The first theme (Le Témoin) appears principally in the form of a Gloria performed by a children's choir accompanied by a church organ and mixes at times a rhythmic disco/pop with a religious choral, that is both joyous and somewhat sacrilegious, so typical of the spirit of Mocky himself. Some variations are simply performed on piano by the composer himself. The second theme (Le Faux Pas) perfectly personifies Antonio thanks to his Italianness and his naive cheerfulness sides. Piccioni shows his talent of orchestrator mixing brilliantly pizzicato strings, flute and sometimes a trumpet sometimes recalling Nino Rota's scores for Fellini.

The limited edition of 500 units, supervised and mastered by Claudio Fuiano, comes with an 8-page booklet with French and English commentary by Nicolas Magenham.