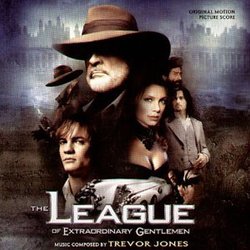 The League of Extraordinary Gentlemen

When combined, an adaptation of a well-regarded graphic novel, a cast led by the well-regarded Sean Connery and a score by well-regarded composer Trevor Jones all failed to produce a box office success with this past summer's fantasy film The League of Extraordinary Gentlemen.  It is shame since the source material was quite inspired, Mr. Connery's screen presence is undeniable and Trevor Jones rarely misses when provided with a larger than life canvas on film.  For Jones, however, this time was no exception in terms of his music's quality.  Perhaps in looking more towards the story on page than what ended up on screen, he has composed a powerhouse score which all agree is a great listen and has in turn become a favorite of mine from this year's crop.

The generous Varese Sarabande album opens with a marvelous, fully orchestral set-piece, "Dawn Of A New Century", heralded with low register brass, male choir, a locomotive rhythm and an infectious, darkly heroic theme which is straightforward yet flexible.  It sets the tone for most of the score and is the first of many highlights on the album.  This material gets expanded in the excitingly full-blooded action tracks "The Game Is On", "Capturing Mr. Hyde" and "Storming The Fortress".  Anyone who enjoyed Jones's furious orchestral styling from Dark City will find this most satisfying.   There is constant motion from all sections, but it never seems chaotic or haphazard, always managing to maintain its focus through each cue.

Another wonderful aspect of the score is its rich, moody string passages, often characterizing the heroic theme as mired in shrouds of melancholy, nostalgia and regret, as in "Old Tiger".   These colors are then developed further in "Mina Harker's Secret" and "Portrait Of Dorian Gray", still displayed mainly through cellos, low woodwinds and harp, not unlike Jones's work on From Hell.   Mysterious and ominous tones are then explored in "Phantom's Lair" and "Treachery", where the male choir and low brass return to bolster the effect.  Even during these sections, Jones never abandons melody, either utilizing existing themes or presenting new material intrinsic to the cue, and thus the listenability factor is quite high on the entire album.

Rounding out all of this are the vocal tracks, consisting of traditional African and late 19th century styled song form.  Some fans objected to their inclusion, but these are not horrid bubble-gum pop tunes shoe-horned into the album, but rather source cues that provide the score further variety.  'Promenade By The Sea' is a quaint and pleasant waltz tune, with lyrics by Victoria, brightly performed by a female duet, while both "Kenya – Wait For Me" and "Son Of Africa" feature the group Ladysmith Black Mambazo in understated, nicely harmonized and engaging songs in their own language.  These all provide wonderful contrast to the already stellar orchestral material, helping this score become a stand out for both Trevor Jones and film score fans in general.