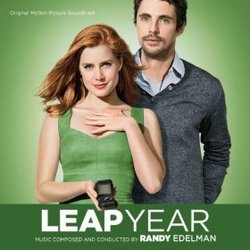 Amy Adams and Matthew Goode star in Leap Year, a romantic comedy that follows one woman's determined quest to get married to the perfect guy... despite what fate has in store for her. When their four-year anniversary passes without a marriage proposal, Anna (Amy Adams) decides to take matters into her own hands. Investing in an Irish tradition that allows women to propose to men on February 29th, Anna decides to follow her boyfriend Jeremy (Adam Scott) to Dublin and get down on one knee herself.

But airplanes, weather and fate leave Anna stranded on the other side of Ireland, and she must enlist the help of handsome and surly Declan (Matthew Goode) to get her across the country. As Anna and Declan bicker across the Emerald Isle, they discover that the road to love can take you to very unexpected places.

The tuneful and Celtic-flavored score is by veteran composer Randy Edelman (27 Dresses, The Last Of The Mohicans, While You Were Sleeping).