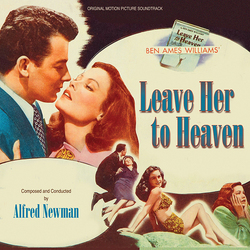 Leave Her to Heaven / Take Care of My Little Girl

What helps make Leave Her to Heaven the classic it is is yet another great score from Alfred Newman. It's short, but what's there is choice Newman, beginning with the three ominous tympani hits leading into a classic Newman main title, and then his beautiful underscore at just the right moments. Half of what great film scoring is about is where, when and how to use music and no one was better at understanding that than Alfred Newman.

The previous release of Leave Her to Heaven on FSM presented only about twelve minutes of the score—here we present it complete and in improved sound from first generation elements, with the exception of the cue "Danny," which was taken from the only available source, which wasn't quite of the quality of the rest.

Because of the brevity of Leave Her to Heaven, we've paired it with the never-before-released Newman score to the Fox film Take Care of My Little Girl. While the two films couldn't be further apart, they do share a few similarities—Jeanne Crain appears in both, and one source cue from Leave Her to Heaven ended up in Take Care of My Little Girl and we present that cue as the bridge between both scores.

We're thrilled to present the first ever complete release of Leave Her to Heaven alongside a new-to-CD Newman score—another Newman treasure unearthed.