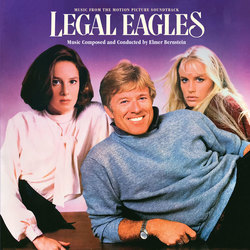 Intrada's latest release features Elmer Bernstein's score to the 1986 mystery/romance/thriller Legal Eagles. Continuing his fruitful relationship with director Ivan Reitman (including collaborations on Animal House and Ghostbusters), Legal Eagles would be the last time the two worked together. The score for their last teaming is a charming one, with a warm, playful main theme. Yet don't be deceived: as with any part thriller, there is also suspense and action, as well as a strained, almost tortured theme for Chelsea Reardon. In many respects the score harkens back to his work in the '60s.

The album features the complete program released by MCA Records back in 1986 from source elements stored in the UMG vaults in excellent condition.

In the film, Robert Redford plays a dedicated lawyer in line for the top job as New York City's District Attorney. Divorced but enjoying a great relationship with his precocious daughter, he finds his life turned upside down by two quite different women—Laura Kelly, an eccentric defense attorney notorious for once putting a dog on the witness stand; and her client Chelsea Deardon, a beautiful yet troubled performance artist convinced that her artist father was murdered by associates who stole his paintings but claimed they were destroyed in a fire. Logan finds himself attracted to both women, while the trio finds their lives in danger as they uncover a decades-old criminal conspiracy.