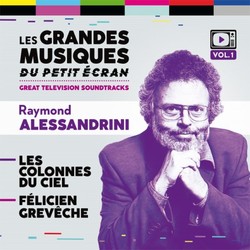 Music Box Records proudly launches a new collection dedicated to original television series: Great Television Soundtracks. In collaboration with Sony/ATV Music Publishing France, the label is pleased to unveil the titles of the first volume with the premiere CD release of the scores from the French TV series Les Colonnes du ciel (Heaven's Pillars, 1985) and Félicien Grevęche (1986) composed and conducted by Raymond Alessandrini.

Adapted by Bernard Clavel from his novel, the French historical five-episode series Les Colonnes du ciel, directed by Danish director Gabriel Axel, is about the conquest of the Franche-Comté province by the armies of King Louis XIII of France during his war against Spain (Ten Years' War).

The French drama eight-episode series Félicien Grevęche, directed by Michel Wyn, tells the story of a countryside physician who works in difficult conditions in Languedoc (Southern France) in the 19th century. The creator and actor, Sylvain Joubert wrote a very well-documented original script about this transitional period when medicine was progressing thanks to the discoveries of Louis Pasteur.

Raymond Alessandrini uses a large orchestra to convey the adventurous spirit of the two series. Both scores showcase a wide range of dramatic passages, epic orchestral pieces, intimate musical cues tinged with folk elements and ethnical flavored pieces. The composer states that these two scores are among his best works thanks to the complete freedom that both Gabriel Axel and Michel Wyn let him enjoy.

Remastered from the original recording sessions, the program has been supervised by Raymond Alessandrini. The CD comes with an 8-page booklet with liner notes by Gilles Loison, discussing the films and the scores including new comments by the composer on his collaboration with the two directors. The release is limited to 300 units.