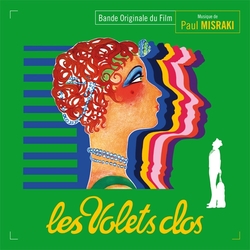 In collaboration with Gruppo Sugar, Music Box Records is pleased to present the expanded score from the original motion picture Jean-Claude Brialy's Les volets clos composed by Paul Misraki in 1973.

The soundtrack was previously released by CAM on LP in 1973 and on CD in 1996 with only a 12-minute suite. This CD release features the expanded score, mastered from the master tapes, courtesy of Gruppo Sugar and presents 7 previously unreleased tracks.