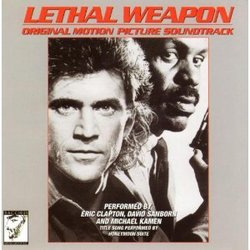 Performed by
The Los Angeles Motion Picture All Stars Orchestra

It was yet another buddy cop movie. Pairing up the reckless, suicidal cop with the more seasoned and straight-edged cop seemed like a good way to bust a large-scale drug smuggling operation. Lethal Weapon, directed by Richard Donner and produced by Joel Silver, ended up becoming a smash hit spawning three sequels. The music by composed Michael Kamen, with performances by Eric Clapton and David Sandborn was released as a 30-minute long album back when the film came out, and never made it to CD. The numerous bootlegs that have shown up since that time have just contained the contents of the LP, with nothing new. Now, however, Michael Kamen has released a limited edition official soundtrack release (not a promo, not a bootleg), containing over an hour of music.

Beginning with the David Sandborn's soulful saxophone wailing out in "Meet Martin Riggs," Eric Clapton's guitar soon joins in, and the resulting cue is a slightly melancholy one, underscoring the inner turmoil that Riggs (Mel Gibson) is going through - the loss of his wife has nearly driven him to suicide. The film opens with "Amanda," a dramatic suicide underscored by ominous strings and sleigh bell percussion. "Suicide Attempt" is a rehash, in a way, of "Meet Martin Riggs," but with more tension at the beginning as he nearly kills himself before the grief overcomes him. (Once again, Clapton's dour guitar work underscores Riggs' emotional pain.)

"The Jumper / Rog & Riggs Confrontation" is a six-minute long cue tense cue that never uses the full orchestra, but gives a splash of saxophone and guitar to add color to the anxiety. "Coke Deal" brings in the over-the-top drama a little more, with bigger use of the orchestra. There are plenty of moments on this album where you can hear hints of Kamen's next big action score, Die Hard.

"Mr. Joshua" and "They Got My Daughter" feel as though they blend together into one cue, with more of the wailing guitars and saxophones with orchestral backing. However, things start to pick up again with "The Desert," a lengthy cue underscoring one impressive action sequence in the film. That is soon followed by one of the more sought-after cues from the score, "Hollywood Blvd Chase." With Riggs running through the streets of Hollywood, the orchestra is right there with him, and the bombastic driving action of the cue never seems to let up.

From that point forward, the bulk of the score seems to be heavy on the action and takes advantage of the orchestra. "Yard Fight / Graveside" is another previously unreleased action cue, and it's pretty relentless. "The Weapon" and "The Nightclub" bring back the band elements to the score, and while the performances work really well in the film, it's hard to claim that they aren't just a little bit "dated" listening to it 15-years after it was written. The album ends with the song "Lethal Weapon" sung by Honeymoon Suite, a song that at least to me, feel right at home because it's just so.... 1980s.

While many people might not feel the need to run out and get this album, there is about 25 solid minutes of killer action music that hasn't been released before. If you're a fan of Michael Kamen's work, or even just a fan of the film, then this album is for you. Sure, the cues aren't presented in film order, but it makes an enjoyable listen. With a limited run, you should get your copy sooner rather than later. If it does well enough, we just might see more of the Lethal Weapon scores get the "expanded" treatment - and I'm never getting too old for that.