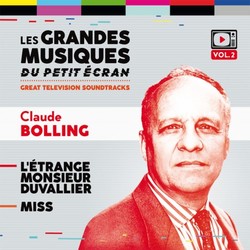 Adapted from a series of novels written by Claude Koltz, who created the character of Raner at the beginning of the 1970s, L'Étrange Monsieur Duvallier is directed by Victor Vicas, the man behind the very famous French TV series Les Brigades du Tigre (The Tiger Brigades). The adaptors transformed the main character into a kind of Robin Hood, worried about the fate of the planet.

Created by Janine Oriano and directed by Roger Pigaut, Miss is about the widow of a police captain who gets involuntarily involved in detective stories. Danielle Darrieux stars this spirited, stylish and charming woman.

These two OSTs produced at the same period and with similar atmospheres have been selected and remastered from the composer's original master tapes. The CD comes with an 8-page booklet with liner notes by Gilles Loison, discussing the series and the scores.