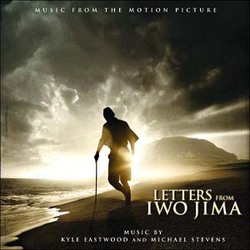 Clint Eastwood\'s attempts at scoring his own films have been, at best, hit-and-miss. His collaborations with Lennie Niehaus yielded some lovely work, including the classic "Claudia\'s Theme" from Unforgiven, and the delicate score for Million Dollar Baby. At other times, his compositions have threatened to sink his films altogether. His work on Mystic River, for example, was melodramatic and heavy-handed, and Flags of Our Fathers combined militaristic clichés with an absurdly dull theme.

It\'s a great relief, then, that Eastwood saw fit to hand over the reigns on Letters from Iwo Jima, even if it only meant passing them down a generation. His son, Kyle Eastwood, is a reputable jazz performer who brings some of his father\'s musical sensibilities to this fine score, but wisely leaves others behind. Co-composed by Michael Stevens, Letters from Iwo Jima is neither bashful about wringing the emotions nor insistent upon beating the listener over the head with histrionics. The decidedly Western approach Eastwood and Stevens take to the scoring seems to impose a somewhat uncomfortable framework around the Japanese stories presented in the film, but this may be due to their need to support Eastwood Sr.\'s choice to tell those stories in a manner accessible to Western audiences.

The score succeeds largely because of its central theme, a haunting elegy, nearly ninety seconds long, that even in its most complete and cohesive statements never seems entirely resolved. Consisting of four similarly structured phrases, it\'s almost too long to be memorable, but there are moments in it that, after repeated listenings, become inextricably connected to the emotion and imagery of the film. It is based on a traditional Japanese pentatonic scale, which lends an Asian flavor, but the instrumentation is, at all times, staunchly Western. In the opening track, "Main Titles", the theme is played three times – first on solo piano accompanied by subdued strings, then with phrases alternating between piano and trumpet, and finally receiving a full statement on trumpet, with a relatively subtle snare drum accompaniment. The structure of this cue is echoed in "End Titles Part I" where the theme is played twice, first on trumpet, and secondly on piano. By opening and closing on piano, the two tracks effectively bookend the bulk of the score, and lend a sense of emotional resolution, however fragile.

The theme is developed in a number of other ways throughout the score. In "Letters Montage", "Shimizu\'s Past" and "Kuribayashi\'s Farewell Letter", extreme reverb suggests the vast, echoing distances across which the soldiers are forced to communicate with their loved ones and lends the theme a timelessness that serves the temporal shifts in the film. Often, as in "Preparing For the Battle", "Suicide" and "Enemy Fire", it is articulated in dissonant fragments through low, menacing strings and jangly piano, powerfully evoking the sense of dread before battle and the nightmare of war itself, without distracting viewers from the action on screen.

Two non-score tracks feature on the CD release. The first is Mozart\'s "Symphony in G Minor, 3rd Movement", simply titled here "Dinner Party". This is the only piece of music in the film that also appears in Flags of Our Fathers and it is used appropriately to suggest the other-worldly quality of Kuribayashi\'s memories of America. The other non-score track is Japanese folk song, "Song for the Defense of Iwo Jima", performed by Juno Ishida, Zanto Kobayashi and Marika Kobayashi. The youthful sweetness of their voices lends pathos to the moment when the soldiers are reminded what it is they\'re fighting for. Both tracks sit a little awkwardly amidst the melancholy of the score, but their importance in the film\'s narrative justifies inclusion on the album.

While the album itself may not make for an entirely satisfying stand-alone listening experience, it delivers pretty much what you\'d expect: a complete catalogue of the film\'s musical cues and an aural reminder of the film\'s emotional power. It may not join the pantheon of classic American film scores, but it is, in its own way, richly rewarding, moving and soulful.