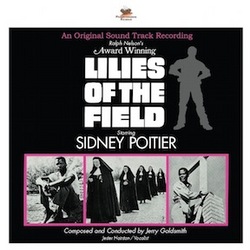 Lilies of the Field

Perseverance is proud to reissue the soundtrack to the 1963 Sidney Poitier film, Lilies Of The Field. This movie is still seen by many as a milestone in cinema. The film launched Sidney Poitier and earned him an Oscar and Golden Globe for his portrayal of handyman Homer Smith, the first time an African-American actor had ever won a major award for Best Actor.

The film was a landmark in cinema and needed a composer who could convey the film with a down to earth, rural, folksy sound. Jerry Goldsmith created a score that was both jubilant and accessible for anybody to listen to.

Featured as part of the score is a piece called Amen featuring the vocals of Jester Hairston. This showed that Jerry Goldsmith was going to be a much sought after composer with his use of southern gospel tinged spiritual music and a score that hews to an Americana vibe.

To many who have heard this score it's a mix of sincerity and jubilation. A must have for any Goldsmith fan and those who want to hear something different.

Some facts about this recording:
—Sony had this remastered for us. It's in mono (it's a 1963 film) but it sounds excellent.
—Limited to 3,000 CDs.
—This is a straight reissue of the original album.
—Original LP cover art.
—Reasonably priced CD.
—Features liner notes by Jeff Bond

We hope you will enjoy this reissue of Lilies Of The Field. We were quite ecstatic to get the rights to this one. Keep this in mind - our deal for this runs over the next few years. With the CD business becoming more and more challenging each day, this may never see another reissue. As with all Perseverance Reissue releases, we wanted to make sure it was affordable so it's there for fans to enjoy at a reasonable price.