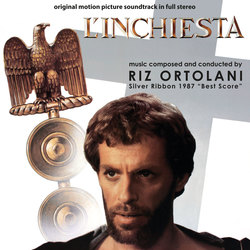 Riz Ortolani composed an evocative musical score for this film. Four selections were published by Cinevox (CIA - 5063). After finding the stereo master tapes from the original recording session, it was possible to assemble a CD of 48:18 minutes. Maestro Ortolani with his great talent was able to represent both the sacred and the profane of the story, with romantic and nostalgic pieces, mystical Jewish moods of great emotional intensity and dramatic battle songs. This is an OST that absolutely deserved to be rescued and preserved for the record archive, dedicated to one of the biggest names in film music. This OST won the Silver Ribbon in 1987.