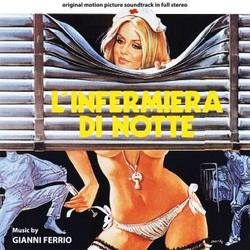 Digitmovies, in collaboration with the Sugar Group, is pleased to publish the OST in full stereo by Gianni Ferrio on CD for the first time ever, taken from the movie: Night Nurse and How to Seduce Your Teacher.

Gianni Ferrio wrote two nice comments on these films that are part of the erotic comedy genre that was ever so popular in the seventies and early eighties. For this CD, that lasts 54:34, we used the stereo master tapes that allowed us to include every note recorded at the time. From the Night Nurse C.A.M. issued a 45 rpm single (AMP 219) with the tracks "La musica č" sung by Gloria Guida and "Gloria around the clock" (we have also discovered the alternative versions of these songs) while from How to Seduce Your Teacher perhaps a single had been arranged, which was to be included in a song interpreted by Miss Guida and probably got deleted, but this song, which you hear in the film, cannot be found on the original master. The author alternates between sparkling dance music with delicate love themes and funny motifs that keep the listener pleasantly entertained for nearly an hour in the company of Gianni Ferrioand his music dreaming of Gloria.