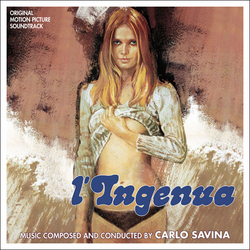 Quartet Records and Beat Records presents two Carlo Savina titles from the scary and the sexy side of the Italian Maestro.

The first score is L'ingenua (1975), an Italian sex comedy. Starting from the orgasmic vocal prelude of the opening titles, Savina's score has a fun, bouncy feel where the presence of the accordion lends a leisurely Mediterranean atmosphere to the score.

L'osceno desiderio (1978), starring Marisa Mell, is a more somber affair—based on the popularity of Rosemary's Baby or the more recent The Omen, the film follows the story of a young American woman whose sudden marriage to an Italian nobleman will usher in the birth of the Antichrist. Just like The Omen, the first half of Savina's underscore is dominated by a false idyll, while the second half prepares the listener to a darker turn of events with a devilish violin solo and an organ.

This CD marks the first ever release of both scores. Mastered by Enrico De Gemini, the 8-page booklet includes liner notes by Gergely Hubai discussing the films and the scores.