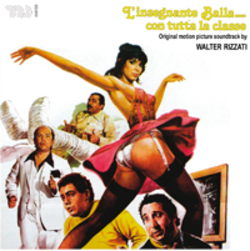 We return to the DDJ series with a soundtrack of funky disco flavor that can be placed in the deepest footsteps of this series. L'insegnante balla... con tutta la classe is a 1978 film starring the legendary Lino Banfi and the beautiful Nadia Cassini, bogged down in the umpteenth appointment in the classic comedy genre.

A real touch of energy to give hard force to the discourse, a totally unreleased soundtrack (if we exclude a song released on the B side of a 45 rpm single that was used as opening theme of the TV program Il tempo domani on side A). Now at last in its rightful place, our beautiful Nadia Cassini will have a chance to make you dance!

Available in a jewel case with transparent tray, with mastering by Enrico De Gemini, graphic layout by Alessio Iannuzzi and liner notes (in Italian and English) by Fabio Babini.