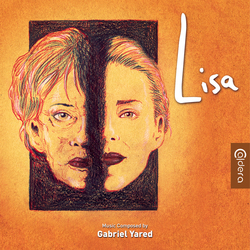 Caldera Records is proud to present the original score for the motion picture Lisa from 2001, directed by Pierre Grimblat, featuring music by Gabriel Yared. His large orchestral score was recorded at Abbey Road and is brimming with memorable, haunting themes and motifs. The focus is on the love between the heroine and Sylvain as the darker themes of the German occupation keep looming in the shadows with the main theme being passionate, powerful and moving, providing a glimmer of hope for the protagonists in the film. Lisa vanished soon after its premiere and the score has been neglected since – until now. One of Gabriel Yared's most moving works receives its first release ever and it is a delightful discovery for fans of the composer and passionate movie music in general.
The 23rd CD-release of Caldera Records features a detailed booklet-text by Gergely Hubai, new front- and back cover drawings by Helmut Breneis and elegant artwork by Luis Miguel Rojas. The CD was produced by Stephan Eicke and John Elborg.