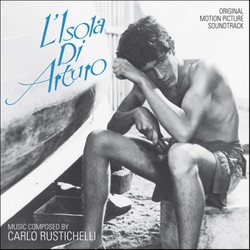 Quartet Records, in collaboration with Gruppo Sugar, releases expanded CD premiere of the beatifull, moving score by Carlo Rustichelli, and its personal favourite.

The music composed by Carlo Rustichelli is a rare gem in the early career of Damiano Damiani and "Arturo's Theme" is still one of the most addictive character themes of 1960s Italian cinema. Primarily played on the guitar, the music follows Arturo's development as a character, his battles with his father and his deeper feelings for Nunziata. A secondary theme for this relationship is also introduced, although appears less frequently and some of its variations weren't used in the film.

Although the score of L'isola di Arturo was very popular in its day, and the "Arturo's Theme" was recorded by various orchestras countless times, only six tracks from the original soundtrack has been available in Japan where it was previously released on LP by Seven Seas (paired with selections from Giovanni Fusco's L'Avventura), so we are especially happy to release the complete presentation of this unforgettable score, offers all the music recorded for the film, including a cue written especially for the trailer.

Mastered by Claudio Fuiano, the richly-illustrated package includes liner notes by Gergely Hubai, who discuss the film, the composer and the score alongside many beautiful stills from the strikingly photographed film.