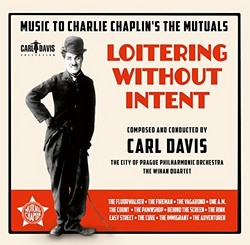 Performed by
The City of Prague Philharmonic Orchestra & The Wiham Quartet

In 2003 and 2004 the British Film Institute released in two volumes, Charlie Chaplin's twelve comedy shorts, created by him at the contractual rate of one a month across 1916 – 1917. This CD is Carl Davis' choice of music, composed by him for Charlie's Mutuals as they came to be known as, after the company that produced them.