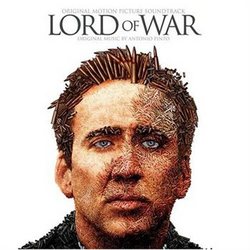 Reviewing a score that complements the traditional Western orchestra with so-called "world instruments" without having access to liner notes is sort of like taking a walk with a stroller down a mine field. You might come out without a scratch on your body, or one of those mothers might just blow half of your face away, and then you'll look like an idiot (not to mention what happens to whatever's in that stroller).

I want to say that Lord of War makes beautiful use of a sadly under-represented instrument, the Moroccan violin, but I might be stepping on a mine. To my ears, it sounds like a Moroccan fiddle. Maybe it's not. Maybe it is, but it has some other name that I'm not aware of. Regardless, this scratchy North African string instrument with an obstinate sound that keeps screaming in wave is a welcome distraction from that battery of by-now clichéd "world instruments", like the duduk and the ney. You can probably look forward to hearing more of the Moroccan violin in at least four different movies in 2006 before it makes its way into three different TV series in 2007, after which it will probably be sitting on a shelf, somewhere, accumulating dust right next to tired Middle Eastern female vocalists smoking cigarettes and talking about the good old days.

Antonio Pinto does a fine job crafting a subtle and melancholic score that doesn't seem like much on the surface but which is intriguing enough to warrant repeat listens. He eschews the pizzicato strings of cheap humor and scores the weirdly comedic movie about an arms dealer by coloring the locales and bringing an aura of tiredness and dysphoria to the music. If you enjoyed the approach Hans Zimmer and company employed for Black Hawk Down, you might take a liking to this watered-down version, with its downcast acoustic strumming on guitars and bandolins, its subtle electronic work, and its Eastern and North African influences. A few melodies are used, such as the overlapping plucked string lines of "Lord of War" and "Warlord", but Pinto's score survives on mere ambience and incidental musical wanderings. "Truth" is a fine example of this style, once again reminiscent of Black Hawk Down, with independent musical ideas brought to coexist in slight dissonance. "AK-47 Love" brings the Russian-infused theme of "Little Odessa" to a satisfying finish filled with a distinct unease and a sense of fatality.

Pinto's Lord of War is not a remarkable score, but it is a satisfying listen, a well-crafted piece of music that is more subtle than broad. Its meshing of quiet guitars and ethereal synthesizers is not entirely original, but the craftsmanship is good enough to survive the scorn of potential cynics. And be sure to appreciate the poignant wail of the Moroccan violin before it becomes yet another cliché. And if it's not called a Moroccan violin, let the flood of emails begin....