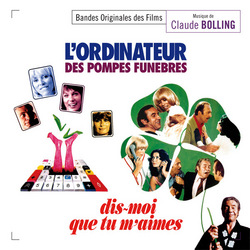 L'Ordinateur des pompes funebres is a mix of police story and black humour. Bolling composed a jazzy score and alternates between sombre and mysterious moods (blended with a Mancini-style of humour), and parts written for a big band, expressing the murderous impulses and madness of the hero. Some are pieces written in a serious tone and others in "new romantic" style, these serve to reinforce the satirical aspect of the film through employment of irony.

Dis-moi que tu m'aimes is a film, in which the humour in particular is inscribed in the vein of French bedroom farce, a genre Claude Bolling took a part in on many occasions in the 1970s. Bolling's sophisticated and inventive music is more often anchored in his own time, as shown by the presence of numerous pop themes typical of the 1970s. This present edition also includes the exquisite title song performed by the main actors, playing a deliberate retro pastiche card.

Music Box Records is very pleased to present the two unreleased scores composed by Claude Bolling in their first-ever complete presentations. Limited to 350 units, this release has been fully remastered from the session tapes and includes an 8-page booklet with liner notes by Nicolas Magenham, discussing the film and the score.