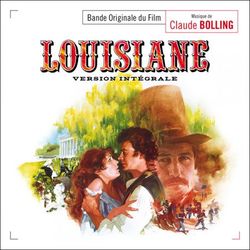 This franco-americano-canadian historical big budget film in English, shot simultaneously for cinema (a three-hour long version) and TV (a six-hour long version) is an adaptation of Maurice Denuzičre's novel. Louisiane tells the story of Virginia Tregan's ruthless devotion to her first husband's Louisiana cotton plantation called Bagatelle and her love for the plantation's overseer, an Englishman named Clarence Dandridge.

Passionate about 19th Century America, Claude Bolling saw the project as an opportunity to recreate the typical musical atmosphere of the Southern United States (Louisiana and New-Orleans) in this time period and to explore his love for jazz. He composed a great romantic theme based on a slow waltz performed by the American jazz singer Dee Dee Bridgewater. The film gave him the opportunity to write a new concerto, played on the pianoforte by Blandine Verlet, which accompanies every step of the heroine in a very Mozart-like style as she climbs up the social ladder. The score is also filled with some romantic music, the sound of European quadrilles and waltzes and a handful of dramatic scoring which was left off from the previous editions.

The definitive 2-CD edition features the complete film score (including alternate versions and previously unreleased cues) as the composer had intended it to be used in the TV version of the feature film. The package includes a 12-page booklet with liner notes by Sylvain Pfeffer, discussing the film and the score.