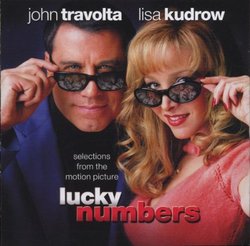 If there is one thing I can say with certainty, it is that Nora Ephron certainly knows how to use music in her films. From Sleepless in Seattle to You've Got Mail, the songs and score have always combined to create a truly engaging experience that strikes an emotional chord with the characters in the film. For her latest, Lucky Numbers, we see a darker side of Nora Ephron in a film about murder, fraud, and broken lives. John Travolta is Russ Richards, a Harrisburg weatherman who also runs a (not so successful) snowmobile dealership. He schemes with Crystal the lotto-girl (Lisa Kudro) to rig the lottery so they can make millions. As expected, things go wrong.

Taking place (based on a true story) in the 1980s, the film's soundtrack employed many songs from that era, and in expected Ephron fashion, was used more for the emotional impact than the popularity of the song. That isn't to say that there aren't some classic hits on this album; it's just that some of them work mainly for the film. The result is an album that feels somewhat disjointed - much as the film did. Songs like "Light of Day" performed by Joan Jett and the Blackhearts (written by Bruce Springsteen), "Moving in Stereo" by The Cars, and "Easy Money" by Rickie Lee Jones fit into the film well, and add a nice touch of flavor to the album, but don't really stand out.

The tracks that do stand out, however, are near perennial classics. "Obsession" by Animotion, "Heaven on Fire" by Kiss, "Rapture" by Blondie, and "Freeze-Frame" by the J.Geils Band are great to listen to - these are songs that I'd nearly forgotten about, and I want to thank Ephron for reminding me of their impact as songs from the 1980s. But the best part was when she utilized "We Are The Champions" by Queen and "My Way" by Jimmy Roselli. It's hard to describe in words the impact of hearing "We Are The Champions" and thinking everything (in the film) is going great - only to have it all come crashing down.

As a nice footer to the album, George Fenton's score has been condensed into a nearly seven-minute long suite. It has a more contemporary band feel to it, with heavy use of guitar and bass, accented with some brass and strings. It's a satisfactory listen - I really can't see how any more score would have been needed. Running about 52-minutes in length, this is a pretty enjoyable cross-section of music that was popular back in the 1980s. It's unfortunate that the film itself was not as good as some of Ephron's past endeavors, but I certainly look forward to her next project.