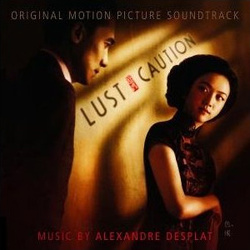 See if this sounds familiar: a tale of fidelity and betrayal, love and lust, set in early 20th Century China against a backdrop of war and East/West mistrust. If I went on to tell you that the tale was set to music by Alexandre Desplat, you would be forgiven for thinking I was speaking of last year\'s A Painted Veil. The narrative similarities between that movie and Ang Lee\'s new film Lust, Caution are striking and the musical ones are as well. But there are important differences that serve to mark this as a new project for Desplat, if not necessarily one among his strongest recent works.

Many directors establish strong working relationships with composers. Directors recognize the important role music can play on imprinting their vision on an audience and generally latch onto composers who mesh well with that vision. We often hear about those pairings and eagerly await the new scores that result. But there are some top tier directors who eschew this conventional wisdom and eagerly search out new composers for each new project, wanting a fresh take on their vision. Ang Lee is such a director. For a while it appeared as though he was going to use Mychael Danna as his composer in choice, as he used Danna in The Ice Storm and in Ride with the Devil, but since that time he has seemed to shoot a movie and then approach a composer based on what he has heard in similar pictures. So when he was crafting an adaptation of Jane Austin, he went to Patrick Doyle, known for his English period dramas; for a superhero film, Danny Elfman, known for Batman, Darkman, and Spiderman; and for a movie exploring Asian cultural practices, he went to Tan Dun, a composer known for making Asian notions understandable in new ways to Westerners.

For Lust, Caution, Lee seems to have heard Painted Veil and approached Alexandre Desplat to work his magic a second time. Here we have a score that features a similar timbral palate to Painted Veil and also uses recurrent ostinati as constructive patterns. It is largely subdued, allowing the dialogue and facial expressions of the actors to carry much of the emotion, while subtly backing it musically. They even both prominently use piano works from the end of the 19th Century, with Painted Veil featuring Satie\'s "Gnossienne No. 1" and Lust, Caution highlighting Brahm\'s "Intermezzo in A major, op. 118, no. 2."

The similarities truly abound, but Desplat is enough of a craftsman to add in new features in Lust, Caution. For this score, he has latched on to an old musical trick of taking the waltz, that symbol of Romantic genteel attitudes, and turning it against those attitudes by using its familiar rhythm to show the delicate dance between romantic partners who cannot show their affections fully because they have secrets to hide. Using this dance allows for two people to interact while leaving things left unsaid verbally, but fully expressed musically. The partners move forward and back, in perfect rhythm and harmony, each giving and taking a bit. But when they stop dancing, their relationship falls apart. This waltz theme first appears on the score in the piano as the "Dinner Waltz." It is delicate and carefully measured and evokes a certain old-world type of charm. When it reappears at the album\'s end as "Dinner Waltz (Traffic Quintet)" at first it sounds exactly the same, even appearing in the same key. But as the waltz progresses you realize the modulations have changed. The character\'s relationship has shifted drastically in the intervening cues and so while they can begin their waltz anew as though nothing had changed, it ultimately cannot end the same, though it must end. This transformation is subtle and displays Desplat\'s talent for using the familiar to conjure something new.

Besides the waltz, the other main theme is "Wong Chia Chi\'s Theme," although it is not labeled as such until the end of the album. This theme has two parts: a perfect arch shape that ascends and quickly returns to its opening note followed by a rocking back and forth minor third. Throughout the score, Desplat uses these two parts together and separately. The final minor third motive opens the theme\'s statement in the "Wong Chia Chi\'s" cue and receives the most expansive accompaniment. Earlier, in "The Angel," the theme\'s first part is the focus. Having a moving part of the theme and one that essentially goes nowhere allows Desplat to quickly mirror the emotional state of the actors onscreen. If he needs a sweeping gesture, he has one, and if he needs to show them frustrated by lack of movement, he has that gesture as well. It is a clever thematic use that allows for great unity in the score.

But ultimately I was left wanting more. Desplat is an expert craftsman but in this instance he seemed to be repeating himself a bit too much. I admire how he put the score together, but the sum of the parts still comes across as a retread of last year\'s excellent score. Desplat certainly provided Ang Lee with what he wanted, but I\'m not sure it was the right choice by either of them.