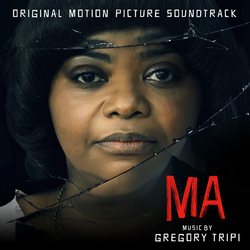 Intrada announces the compact-disc soundtrack release of Universal Pictures latest Blumhouse thriller, Ma, with music by composer Gregory Tripi. Tripi composed a score that evolves alongside the main character, Sue Ann (Oscar-winner Octavia Spencer), as her character becomes increasingly unpredictable and dangerous. The score is primarily electronic, although Tripi features bassoon – an homage to his childhood instrument and catering to an urge to reconnect with it. As a result, the score features long, textured notes emanating from the bassoon. He anchors the score around Ma's theme, splitting it into two forms. One reflects Sue Ann's younger self in flashbacks, played on a metal drum called a Halo and then later on piano. As the film progresses, the theme gets kinky and disturbing, just like Ma. The score features an unorthodox pallet of sounds – glassy instruments, analog synthesizers, live cello, voice, ukulele and even pitched wine glasses. It all culminates in a score as unhinged as Ma herself.

In the film, Sue Ann is a loner who keeps to herself in her quiet Ohio town. One day she is asked by a teenager to buy some alcohol for her and her friends, and Sue Ann seizes the opportunity to make some unsuspecting, if younger, friends of her own. Soon they begin partying freely in her basement, save for a few rules: stay sober. Don't curse. Never go upstairs. And call her "Ma." Soon hospitality transforms into obsession and dream turns to nightmare. Ma's place goes from sanctuary to hell.