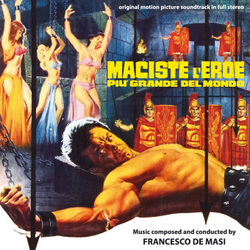 Digitmovies, in collaboration with the Sugar Group, presents Volume XXVI of the series dedicated to the Italian Peplum by issuing on CD the complete OST, in full stereo, by Francesco De Masi for the movie Maciste l'eroe piů grande del mondo (Goliath and the Sins of Babylon) directed in 1963 by Michele Lupo and starring Mark Forest, Giuliano Gemma, José Greci, Erno Crista, Livio Lorenzon.

For the character of the dwarf, Maestro De Masi has written a funny theme (Tr.13, Tr.22) in contrast with the glorious atmosphere of the plot. Among the many new tracks we can find an interesting alternate take without the eardrums of the "Main Titles" (Tr.21) which was not used in the film. This CD is a necessary rescue and preservation in honor of the great musical art of Francesco De Masi.