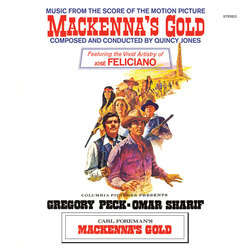 Intrada presents two Quincy Jones' scores one CD—MacKenna's Gold premieres alongside his Oscar-nominated In Cold Blood. Up first is Mackenna's Gold, freshly mixed from the 8-track record album recording sessions and using the 2-track RCA album masters, making a powerful argument for Jones' versatility. While he undeniably brought his pop expertise to bear in the groovy keyboards and drums, his orchestral acumen and training with Nadia Boulanger are on full display. Whether in the quasi-religioso feeling and harmonically rich writing or the harrowing percussion and brass featured in this score, his mastery is clear. Jones partnered with Carl Foreman and Puerto Rican singer José Feliciano, in his film debut, to create "Ole Turkey Buzzard." The ballad charts the course of a raptor who waits hungrily for the death that follows where men lust for gold.

Quincy Jones' score for In Cold Blood is a jazz fever dream, shot through with weird instrumental and vocal effects. Often, the ensemble is a thicket of nervous energy, twitchy and unpredictable. Elsewhere it becomes a slow-motion nightmare, a morass of dissonance and sliding pitches. Even more than on Mackenna's Gold, Jones engaged with the sound design, layering dissonant woodwinds over screeching bus brakes, using water-filled bottles during a bluesy interlude where the killers scavenge glass, and suggesting a heartbeat in anticipation of the haunting finale.

Both scores show different sides of Quincy Jones and both are presented from well-preserved master elements at Sony Pictures.