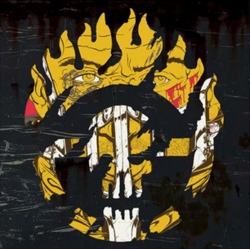 This limited edition pressing features original artwork by Boneface, and is housed in a die-cut slip cover, with two interchangeable inserts (the titular Max and the film's big bad Immortan Joe).

Mondo exclusive version pressed on 180 Gram White Vinyl with Silver Color-In-Color in honor of the War Boys going Chrome in preparation for Valhalla.