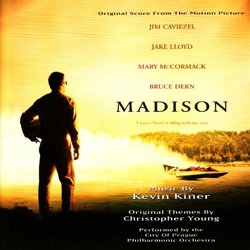 Certain scores are like that mystery box from the movie Dune. You look at the packaging art, the composer listed on the cover, the track listing, and you have no idea what it\'s going to sound like. Case in point: Howard Shore\'s Lord of the Rings. It was fairly difficult for anyone to guess exactly what this combination was going to sound like.

Other scores are quite the opposite. They\'re predictable. There\'s good predictable and there\'s bad predictable. Fortunately, Kevin Kiner\'s score to Madison falls into the "good predictable" category. All you need to know is that the movie is about a hydroplane underdog in a small Indiana town called Madison: you take one look at the cover and you know exactly what the music will sound like.

Welcome to Madison. Kiner\'s score, which is built on Christopher Young\'s melodies, is nothing new and yet it works because of its solid construction, its thrilling energy, and because, once in a while, we all like to hear an orchestra throw caution out the window and unabashedly wrap itself in heroic and triumphant idioms. Most of the cues delicately build to the grand finale with solos for clarinets, flutes, and pianos over sad, lingering string harmonies. While these cues, such as "Grandma\'s House", are very well composed, the meat of the score only comes near the end. "The Gold Cup" (the second cue with that name on the album) finishes with a commanding fanfare for French horns and trumpets over drum hits. A reverse cymbal opens "You\'re the Driver", which accumulates rhythmic and melodic material over its course, always hinting at Young\'s catchy themes and reminding its listener of Goldsmith\'s own Rudy. The minor key ostinato on the strings gives way to a major key uplifter in "Final Heat", which lets the entire horn section time to shine in the sun with a reprise of the heroic theme. Violins ascend, snares march onward, and flutes effervesce in wondrous trills before the entire orchestra erupts in a climactic rendition of a second theme at the 3:30 mark.

The album cover says it all. A sepia-toned piece of Americana, gently lit in twilit hues of orange, showcasing a shadowed sports hero, helmet at his side, with the sun dusk delicately lighting his face. Translate those colors into music and you have Kevin Kiner\'s score, a predictable romp in Small Town, America, by ways of water-speeding heroics and glorious victories.