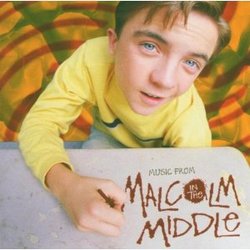 Malcolm in the Middle

Review: Malcolm in the Middle

I've been a fan of They Might Be Giants since I heard the song "Your Racist Friend" on their album Flood. Wow! Who else ever followed a slammin' metal guitar solo with a Mariachi-influenced trumpet solo? So when I heard their quirky sound on the credits for the Fox show Malcolm In The Middle I pricked up my ears. It's always a nice change of pace to hear a music supervisor in the television arena who understands the thematic material of the show and works to enhance and support that someone who really gets it.

Anyone who's seen the show knows that it is quirky, often hilarious. They Might Be Giants was a superb choice to provide music on the show. A little later down the line and, low and behold, it's time to release a compilation CD of music from the show. Well, if you're tired of Vonda Shepard et al on that other (silly) Fox show, you may want to give this disc a listen.

It's full of quality tunes from a few well-known acts TMBG, Barenaked Ladies, Eagle Eye Cherry, Hanson and some nice surprises from lesser-known artists Flak, Travis, Rednex and Gordon. "Boss of Me", the main credits tune, opens the disc and I must say it's great to hear the changes that this tune goes through outside of the (necessarily) limited setting of television credits. Cool.

If you listen to the lyrics of nearly any selection on the CD you can get a feel for the good time oddity found here. For that matter, just look at a few of the titles: "Drunk Is Better Than Dead" (The Push Stars), "Heaven Is A Halfpipe" (OPM) and "We Are Monkeys" (Travis). Musically the disc has a lot of different sounds that offer something for nearly everyone with a pop bent. You're a fan of the Beatles at their wacky best? Try "We Are Monkeys" on for size. Straight pop is "your bag, baby"? Hanson's "Smile" might bring a smile to your face. (And if you're a fourteen year-old girl it may bring much more than that.) Want something that slams a bit harder? "Tune In (Round Window)" should work. You get the idea. There's a wide variety here.

The highlights for me? Hmmmmm... Tracks 1 through 17, maybe. Actually, I wouldn't say it's great from top to bottom, but what would be the fun in that? That would make the disc completely homogenous. Isn't homogeneity the enemy of the makers of Malcolm in the first place? Great show, great music supervision, great compilation CD.

My recommendation? Get it. Good music to drive to. Great music to torture your younger and older brothers (and parents) to. Go, Malcolm, go!