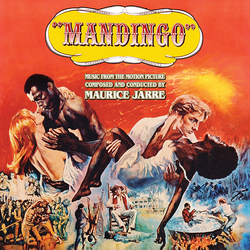 The 1975 Paramount film Mandingo opens with a blues song, "Born in This Time," sung by Muddy Waters. Waters' participation came at composer Maurice Jarre's request. Much of Mandingo's underscore derives from "Born in This Time," with Jarre changing up the rhythm and highlighting its intricate countermelodies. To this, he adds a second theme—a folksy ditty that ranges in tone from genteel romance to spirited bustle. These themes appear initially to be simple parody, but as the film progresses, sour notes and jangling dissonances intrude, to ever more disturbing effect. More subtly, Jarre thickens certain cues with restless harmonies and busy, almost frantic counterlines to create a sense of uncomfortable aural pressure.

In striking contrast, the score to Mandingo is paired with an earlier Jarre effort from 1971—the premiere release of his light and jazzy score for the Neil Simon-penned comedy Plaza Suite. Plaza Suite consists of three acts, each starring a different couple and set in Suite 719 of Manhattan's historic Plaza Hotel.

Brief as his musical contribution is, Jarre manages to infuse each segment with its own distinctive character. Story one begins with an air of stylish elegance and ends with a melancholy passage of disillusionment. Story two is bookended by a swinging, synth-infused number that dovetails humorously with Jesse's self-important swagger and somewhat ridiculous mod toupée. In between, however, is a solo flute appropriate to the two lonely souls looking for solace in one another's company. Finally, the wedding segment receives a mellow ballroom waltz, alongside tongue-in-cheek riffs on Richard Wagner's famous "Bridal Chorus" from the opera Lohengrin.

Mandingo was newly remixed from the 16-track 2″ masters, which survived in excellent condition. For Plaza Suite, four cues were taken from a set of 1/2" three-track masters, recorded in early 1971 at Goldwyn Studios. The remaining two cues have been carefully restored from a mono source.