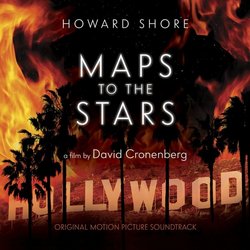 Maps to the Stars

Celebrating 35 years since their first collaboration, Maps to the Stars is the 15th David Cronenberg film to feature music by Howard Shore. The film marks the fifteenth feature film collaboration between the director and the composer.

Winner of the 2014 Cannes Soundtrack Award this past May, Maps to the Stars was given the award for the original score best suited to a feature film in official competition by a jury of 15 critics.