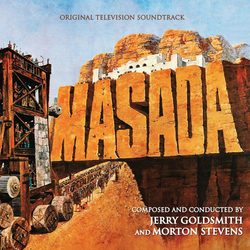 As 2021 comes to a close, Intrada revisits a Jerry Goldsmith classic – his epic miniseries score from 1981 to Masada, co-composed with Morton Stevens. For this release, Intrada has made two large improvements. The first is the inclusion of the original MCA album which was not included in the first edition. Goldsmith re-recorded 38 minutes in London for the superb LP at the time the miniseries aired, although he curiously omitted his fierce action cues as well as many other sequences. The second improvement is found in Morton Stevens' score for the third and fourth parts. While not previously released strictly in mono, the Stevens material was sourced from a split-mono configuration where different sections of the orchestra were isolated on their own channels. While this allowed for a stereo presence and separation, having clusters of the orchestra segregated was not ideal. For this release, Universal was able to unearth the 24-track elements, allowing for the first true stereo presentation of the score, where listeners will notice a myriad of details not accessible in the previous mix. Discs 1 and 2 feature the complete score, disc 3 contains a plethora of extras not previously released, and disc 4 is the MCA album.

Composer Jerry Goldsmith rarely sought out specific assignments; usually directors or producers came to him. But Masada (1981) was an exception – this was a score he was passionate about writing. Universal was willing to invest heavily in the score, including sending Goldsmith to Israel on a 10-day trip to research ancient music for the project. Goldsmith initially signed on to score the entire four-night, eight-hour miniseries, but production fell behind schedule and other projects called, necessitating bringing in Morton Stevens, at Goldsmith's suggestion, to conclude the scoring of parts three and four.

Goldsmith wrote three major themes, two for the Jews and one for the Romans. The primary Jewish theme, which would become known as the Masada theme, is a hora-style anthem for the indomitable spirit of the Jewish people, its dance-like rhythms reminiscent of happier times and the hope of more to come. A second theme reflects the darker side of the Jews of that First Century, the sadness and seemingly endless struggle against domination and enslavement by other peoples. For the Romans, Goldsmith wrote a march that was designed to suggest the might of Imperial Rome, with military precision and prominent parts for brass and percussion. Relentless, even pompous in its simple, decisive, might-makes-right character, it recurs in many forms throughout the miniseries.

The story of the siege of Masada in 72 A.D.– in which a hardy band of Jewish Zealots held off 5,000 Roman troops for months in a mountaintop fortress – is one of the most remarkable in the annals of world military history. Peter Strauss was cast as Eleazar ben Yair, the charismatic, intense commander of the Zealots. Peter O'Toole was cast as Cornelius Flavius Silva, the complex, brilliant Roman general in charge of the Tenth Legion.