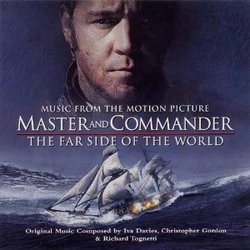 Master and Commander: The Far Side of the World

Review: Master & Commander - The Far Side of the World

2003 will be remembered in the film community as the year in which the sea-faring epic made a grand return to the silver screen. First was this summer's hugely successful, popcorn-flavored adventure Pirates of the Caribbean, highlighted by an eccentric performance from Johnny Depp and a fanciful storyline. Now this fall Master & Commander: The Far Side Of The World has been delivered, based on the best selling series of Patrick O'Brien novels, directed by the famed Peter Weir, anchored by a strong Russell Crowe performance and is the more dramatic flipside to the Disney-produced Pirates. However, both films share a distinct lack of the old swashbuckling Hollywood scores, rich with swelling strings and brass, triplets and soaring fanfares. The Disney production could have handled a bold orchestral sound, but by now we should be accustomed to Weir's predilection for understated scoring in all of his projects.

What was initially promising was that he hired Christopher Gordon to compose music for the film, a composer well regarded for his sweeping scores for the recent television projects Moby Dick and On The Beach. Instead, he has been reigned in by Weir's subtle sensibilities and asked to share the composing tasks with two others, Iva Davies and Richard Tognetti. In addition, they share the soundtrack slate with both existing classical works, by the likes of Mozart, Vaughn Williams, Bach and Corelli, and traditional tunes from the period. The most extensive score track is the 9-minute "The Far Side of the World" which begins the album. Starting with pounding percussion, seemingly straight from a Media Ventures score, the track then expands into ominous, non-melodic string and brass textures before ultimately delving into an enjoyably lively string-only section. The heavy percussion again leads off in "Into The Fog," accompanied by dark yet smooth string and brass lines. This texture continues in "Smoke and Oakum," "The Doldrums" and "The Battle" with little or no variation, often augmented by more ambient sections. These cues are most effective within the context of the film due to the rhythmic percussion and tense string lines, but not so much as interesting listening material on their own. The opening track is a decent summation of all the material the score has to offer.

Not surprisingly, the best melodic material arrives in the classical tracks. The best of these is Vaughn Williams' "Fantasia on a Theme by Thomas Tallis," a glowing and inspiring string work which best conveys a sense of the old Hollywood style of scoring sea-faring epics, i.e., high on emotion. I can see how Weir, knowing that he would use these memorable and tuneful pieces in his film, wanted the original score to play a non-melodic role for contrast. If he had had Gordon compose music in the vein of his own lush, orchestral Moby Dick score, these cues would have been fighting for melodic superiority over the existing, well-known classical pieces, something that might have drowned the film. One cannot argue with the dramatic success of Weir's films and he is normally quite adept at blending found music and original score into an engaging experience. The only drawback in an epic film such as this is that a unifying, tuneful theme would have provided a stronger musical backbone for the picture, whether it represented Crowe's determined character, the plight of the crew or the sailing ships themselves. I think what Weir wished to avoid here is the subjective nature of thematic original scores, where the audience identifies a character's motives and actions often through his theme, instead presenting Master & Commander in more objective frame. The events unfold over neutral background music, capable of only complimenting or contrasting the onscreen action but never able to provide further subtext or unique emotional content.

The album is an effective memento of the film, but the ambient, percussive score tracks might be listened to less then the classical works.