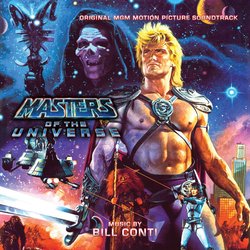 Masters of the Universe

He-Man and the Masters of the Universe made their retail debut in 1982 as executives at Mattel wanted their own line of action figures to compete with Kenner's blockbuster Star Wars toys. Masters of the Universe went on to huge success in the 80s and spawned comics, a cartoon series and a movie produced by Menahem Golan and Yoram Globus for their company Cannon Group. Released in 1987, the film stars Dolph Lundgren and Frank Langella. It would go on to become a cult classic and notably became one of Cannon's last films. Featuring a blockbuster score by Bill Conti, we are proud to offer this score as a 500 unit limited edition.

This edition features different cover art as well as newly commissioned liner notes by composer Edwin Wendler. For the notes, we wanted to get a composer's point of view on the score (which is something we want to do more of on future projects). Disc one is presented as the full score while disc two features the original 1987 soundtrack album. There is a whole new generation of fans collecting the toys and watching the old cartoon series. A new film is coming out later this year which should create major excitement with fans. This is a great opportunity for new fans (and old ones who missed out on previous releases!) to pick up this soundtrack and enjoy what we feel is one of Bill Conti's best scores.