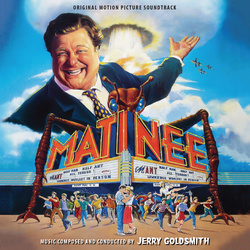 Intrada announces an expanded edition of Jerry Goldsmith's score to the 1993 Universal film Matinee. The film is part of the lengthy collaboration between Goldsmith and director Joe Dante and is the final soundtrack in that relationship in need of an expansion. The score is centered around two themes, a whimsical one for the filmmaker/showman Lawrence Woolsey and a charming, busy theme with a tinge of nostalgia for the character of Gene. But there's more in this theme-rich score, with a love theme infused with period flavor and based on Max Steiner's A Summer Place. Combined with action and suspense, Matinee provided Goldsmith with a wealthy opportunity to create a variety of colorful ideas.

This expanded edition increases the runtime of the score proper to 51 minutes, including the long sought-after cue "Mobilization," representing the sparse appearance of Goldsmith's military presence in the score as the onscreen Cuban missile crisis heats up. To produce this release, Intrada had access to the 48-track scoring sessions that contained the three-channel digital stereo mixes made for the film by Bruce Botnik – all in pristine, crisp and detailed sound.

In the film, filmmaker Lawrence Woolsey (John Goodman) barrels into Key West, his sights set on the historic Strand Theater which he plans to trick out with "Atomo-Vision" and "Rumble-Rama" for an advance screening of his latest opus, Mant! Meanwhile, local teen and Navy-brat Gene, a dedicated fan of genre flicks, and his colorful assortment of friends navigate growing up during a frightening crisis with Cuba just a stone's throw away. This includes Gene's crush Sherry who is stalked by her ex-boyfriend Harvey, as if things weren't complicated enough. But when Gene sees through Woolsey's promotional tricks and offers to help, the impresario takes the boy under his wing and expounds upon the cathartic power of horror pictures—a lesson that is especially poignant since Gene's father has been deployed to the front lines of Cuba. All roads converge during the premiere of Mant! when a lust-crazed Harvey, recruited into operating Woolsey's theater wizardry while wearing a hokey ant costume, decides to take matters into his own hands—or claws, as the case may be.